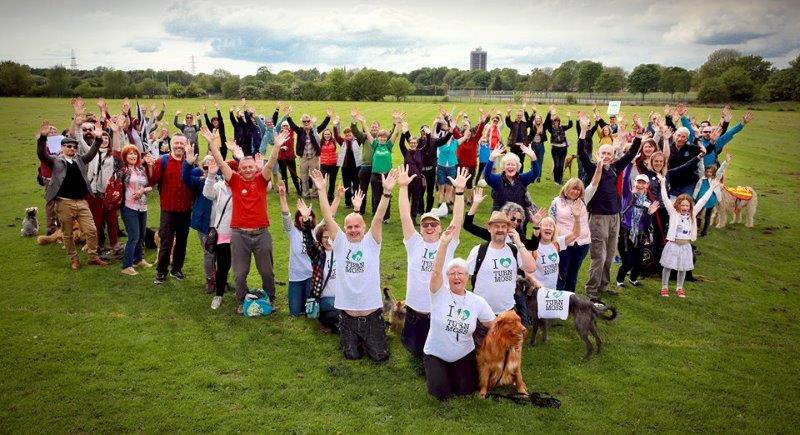 Turn Moss is 39 hectares of open greenspace situated in Trafford, Greater Manchester between Stretford and Chorlton. In January 2018 planning permission was sought to develop approx. 25% as a training centre for Salford City Football Club which would have resulted in a sizeable area of Turn Moss being fenced off from public access. The area has great biodiversity, is used by many local people throughout the year for walking, relaxing, dogwalking and playing football but has been poorly managed with little investment for 20 years. There was immediate local opposition to the proposals.

We formed a Strategy Group early 2018 and began our campaign with public meetings to plan our events. We organised the following:

Friends of Turn Moss was founded February 2018. In May 2018, when Labour was voted into office in Trafford the controversial plans were immediately stopped. We were then able to turn our attention to improving Turn Moss for the benefit of the local community. FoTM now has the largest Friends Group in Trafford (approximately 3000+ Facebook and Twitter), providing a huge volunteer base. We utilise social media and traditional methods to reach and work with our local community.

In the nine months since May 2018 we have begun restoring the historic hedge with City of Trees and local schools, planted trees and bulbs, cleared overgrown areas, painted the portakabin, provided evidence of flytipping leading to prosecution, organised many litter picking sessions, woodchipped paths, regular meetings with local Councillors, written a Code of Conduct for dog walkers, grafitti removal, deep clean of changing rooms and a defibrillator.

That’s not all, other achievements include –

We now have an excellent working relationship with Trafford Council and Trafford Leisure and work with Amey and Kingdom (stakeholders) to improve Turn Moss for the benefit of the local community and beyond and to publicise its existence more widely. So much so that on 15/2/19 we approached Trafford Council regarding setting up a Working Party/Management Group whereby we could move forward together. This was agreed.

“The relationship between Friends of Turn Moss, Trafford Leisure and some of the football clubs, Gaelic football and elected members goes from strength to strength. It is apparent that all parties want to improve Turn Moss”.

“It has been a pleasure to work alongside the Friends of Turn Moss over the past year as they have worked tirelessly to bring a vison to Turn Moss to benefit everyone that uses the playing fields”.

Successful grant application from Trafford Housing Trust Social Investment programme for £10,000 to provide amongst other things:

On 12 February 2019 we heard that Trafford Council have allocated £375K towards alterations to the changing rooms and improvement and drainage of pitches!

Our campaign has succeeded in stopping the private development on Turn Moss while securing significant investment. Exciting times ahead!