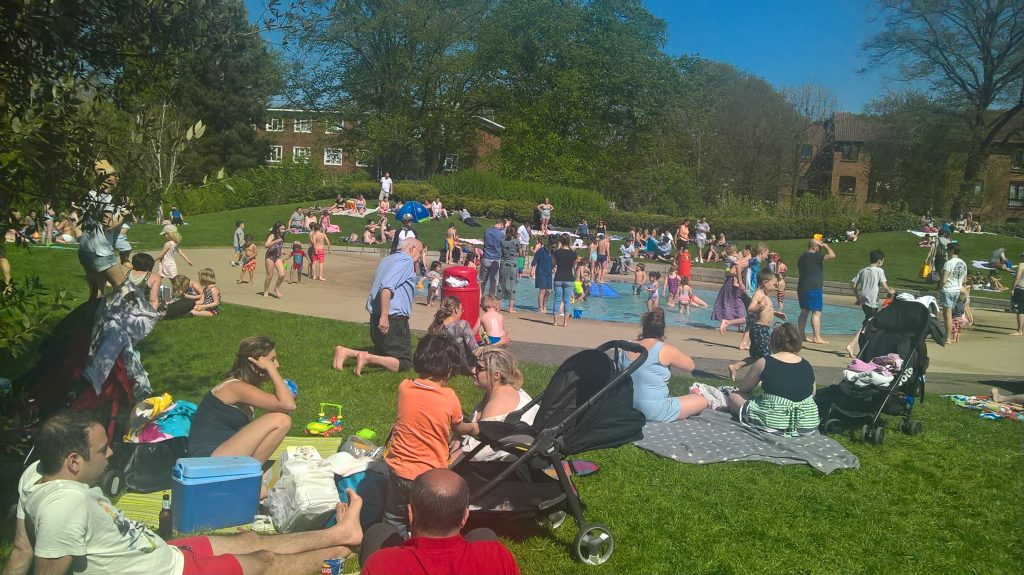 Dukes Meadows is a 170-acre site bordering the River Thames in Hounslow, West London. Twenty years ago, it was pretty derelict. The Pavilion had smashed windows and was covered in graffiti, kids joy rode cars on the meadows and then burnt them out. One weekend two cars were burnt on successive evenings up by the Band Stands. The old paddling pools were cracked and full of weeds and the playground had a few bits of sad looking equipment, cracked tarmac and a lot of glass. Kids took and dealt drugs in the park.

The estates around the park also had problems with neighbour disputes and so on. Alexandra Gardens appeared on a Panorama documentary and was labelled as a racist neighbourhood, where people were frightened to go out. Fly tipping reached industrial levels when three, ten-wheeled trucks turned up one day and dumped large piles of building rubble on the riverside promenade in the middle of the day. The allegation that the area was racist really stung and people didn’t recognise the place portrayed as where we all lived.

Around the same time, the Council proposed giving a 99-year lease on a large part of the park, where Meadonians, a long-established local club, played football, to enlarge the golf club. At its lowest ebb, those two things galvanised the community to organise around the football club and start to fight back. A successful campaign that brought the community together resisted the proposal and Meadonians Chair, Bob Atkin, encouraged us, at the celebration drink, to carry on and try to improve the park. Bob was the first Chair of Friends of Dukes Meadows.

We thought we would pick up litter and plant a few trees, but we got the bit between our teeth and it snowballed from there. We set up a youth club, in the local community centre with local mums, in order to stop the kids trashing the park and also set up a weekly food market to raise money and encourage people to visit the area.

We put a proposal to the Council to give us a lease on the Pavilion if we renovated it, to create studios for artists that we could let out to raise further revenue. We raised £350k in grants to build a new paddling pool and found a sustainable model for management and oversight of it following a model at a nearby pool in Runnymede.

Three years later we raised £450k to build an adventurous, natural play area. Since around September we have volunteered every fortnight on Sundays to make improvements, such as planting trees and hedges and to maintain the things we’ve created.

The park is unrecognisable now from the scary no-go area it was. It is a hugely popular park and in the summer people come from all around to visit the paddling pool. The estates around the park have changed, it isn’t entirely due to the park project, but that did start to bring people together and make them feel proud of rather than ashamed of the area.

People new to the area wouldn’t believe what it used to be like, but there are a lot of people still here who remember it from then. It is great when we are out on a Sunday volunteering in our DMT high vis vests and people come up and thank us and say how lovely the park is now.

Most of the park was green dessert and a lot of it is still mown grass, but now there a lot of quite mature trees, an orchard, hedgerows and small copses of trees that we have put in. It is really special to walk around the park in Spring or Autumn and see what we’ve created. We joke about inspecting the estate; not many people who aren’t very wealthy can enjoy the experience of having created a small landscape.

The community and volunteers are entirely responsible for regenerating the Meadows and transforming it from a derelict no go area into a lovely park. It has a least a thousand champions, people who suggested things, made introductions and links, generated ideas, built things and planted things. I think that’s what makes the park special.

We were led by people who wanted to find answers rather than provide them. The leaders of the group didn’t have an idea of what the park should be, they didn’t design anything, they managed a process to find the best ideas and solutions. We did the most naïve consultation when we started; we invited people to walk around the park and gave them paper and pens to jot down ideas as they walked, then we went back to Meadonians clubhouse and all discussed them. That’s why we focused on the play areas and building a new water play area, rather than on the Promenade and Band Stand. Ideas like creating the community orchard and improving the entrances to the park came out of that initial meeting.