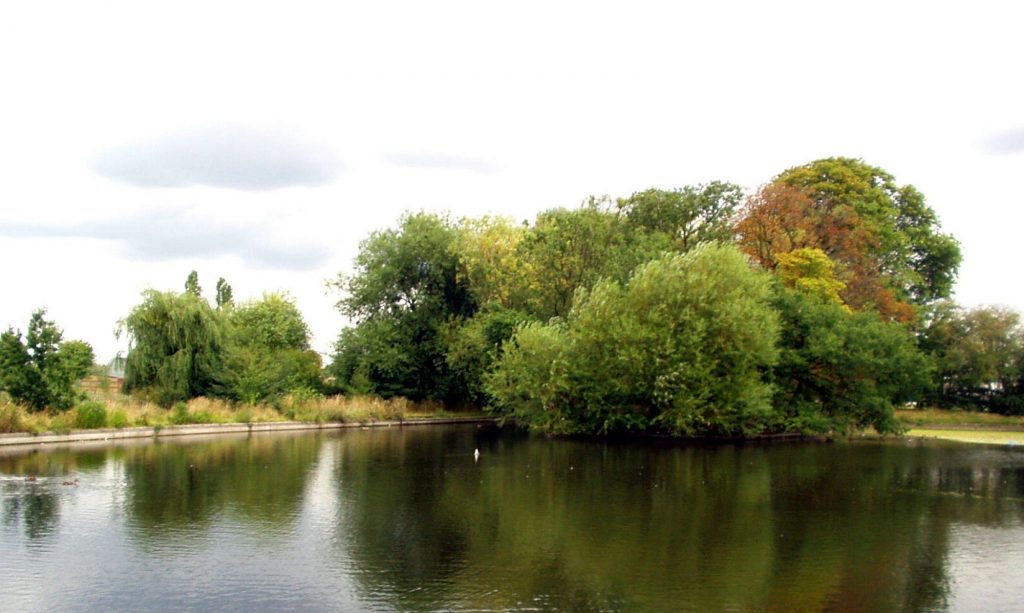 The Lordship Rec Lake was restored over a period of 12 years as a lovely area for nature conservation and relaxation in the centre of the Rec, Tottenham’s district park.

A historical feature. It is thought that there may have been a water feature at this spot (on some ancient maps called ‘Homestead Moat’) going back to times. When Lordship Rec was created in the 1930s it became a popular boating lake. But by the year 2000 due to cuts to parks budgets it had fallen into decay and disuse.

Community Action. When the Friends of Lordship Rec were formed in 2001, our first ‘hands-on’ project was to restore this area as a habitat for wildlife and for picnics.

After 12 years of volunteer days, applying for additional funding, and lobbying – and working with our park staff, the Council and others – we managed to create many improvements, g

The park staff also created some natural plant beds on the southern side. The Friends also help with pond maintenance, produce signage for park users about respect for wildlife, and help organise occasional activities.

The Lordship Woodland consists of 0.75 hectares of mixed conservation & amenity area at the southern end of Lordship Rec, Tottenham’s district park. It lies to the east of the main path from the Downhills Park Rd entrance.

In the the woodland was planted with native species by local people, including school children, to re-create an area of what would have been the original Tottenham woodland. It includes a wide range of native trees, shrubs and other flora.

A great habitat. The western edge of the wood merges with one side of an avenue of plane trees which runs either side of the path from Downhills Pk Rd gate. A range of attractive shrubs grown up in this area, providing valuable wildlife habitat – including dog-roses which look spectacular during the autumn in the afternoon sun.  Inside the woods are some relaxing glades. There is a hedge (predominantly hawthorn) and shrubs along the eastern boundary of the woodland where it meets back gardens.

Friends of Lordship Rec have successfully ensured that the woodland has been ‘reclaimed’ from being an overgrown and unsafe area blighted by rubbish dumping and anti-social behaviour. Through our fundraising and regular maintenance efforts, backed by the Council and The Conservation Volunteers (TCV), the woodland has been turned into an attractive and valuable public wildlife and recreation area for the people of Tottenham – a densely-populated urban area. The Friends designed and installed interpretation lecterns, and created a winding path through the woods. Since then we’ve been awarded an annual Green Flag for our efforts.

Since 2012 the Friends have continued regular maintenance work helped by TCV – woodchipping the path, pruning overgrown shrubs to maintain sightlines, cutting back nettle patches etc. In addition, some of the overcrowded trees have been thinned out to create glades, degraded path edging planks have been replaced, path reinforcement surfacing (groundguard) has been laid at entrances, two ‘french drains’ (and pond) to divert water from crossing over the path have been installed by volunteers, residents backing onto the eastern edge of the wood have begun to manage and improve ‘barrier’ planting, and a new naturalised Picnic Area has been established between the Model Traffic Area and the northern part of the Woodland.

Also, having raised £3,000 from public donations, the Friends installed a memorial stone sculpture on the west side of the Woodland to commemorate the 43 local residents who died near this spot in a second world war air-raid shelter which suffered a direct hit from an aerial bomb on 19 Sep 1940.

The Lordship Rec sports field is the enclosed area in the northeast corner of the Rec. Up to the 1980s, it was the playing field of Somerset School (formerly Rowland Hill School). When the old school was demolished to build the Somerset Close housing estate, the Broadwater Farm Youth Association led a successful campaign to protect the field for community use. The community then cleared the field of rubble and adopted it for the youth of Tottenham. Broadwater United Sports and Football Academy (BUSAFA) was set up in 1981 and its teams have used the pitches ever since. Volunteers from , along with staff from the Broadwater Farm Community Centre and the Lordship Rec gardeners, have managed and maintained the field and its pitches.

Over the years many thousands of local youth have played regular football on the field, and over 200 have gone on to semi-professional and professional status. For a few years in the there were also regular cricket matches organised by the Tottenham Cricket Project.

In 2002, members of Broadwater United and the newly-created Friends of Lordship Rec got together to set up the Lordship Rec Users Forum. The aim was to bring together all the key community groups and partners to work with the Haringey Council Parks Service to develop a community-led vision and plan for the regeneration and co-management of the whole park. The LRUF has also organised annual community festivals in the Rec. In 2012 8,000 residents attended the Lordship Rec ‘re-launch’ festival to celebrate the completion of £4m of lottery-funded improvements throughout the park. The extensive works also included drainage, re-seeding and border improvements to the sports field itself.

In 2013 in recognition of the importance of the sports field and of all the efforts to regenerate the whole park, Lordship Rec was granted national ‘QE2’ status, giving it protection for all time as a public green space for sports and activities. Later that year Lordship Rec received a national Runner Up award for the ‘Most Improved’ of the 1,500 QE2 spaces in the country!